This month we are sharing a more surprising hidden treasure that Union staff discovered while preparing for the Memorial Union Reinvestment. Hidden deep inside the walls of the Union Theater, we uncovered three rustic containers with peeling labels under layers of dust. One of them, a large jug sealed with plastic wrap and a rubber band and the others, tall dark-tinted glass bottles. Upon closer investigation, it was apparent the containers weren’t just full of water–they were vessels full of carefully crafted moonshine. 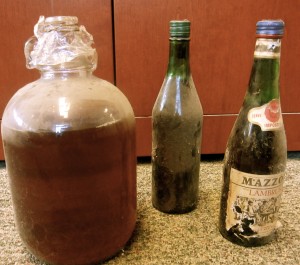 Moonshine, also known as hooch or white lightning, is a very high proof, distilled liquor produced in small batches illicitly. According to Wikipedia, the word “is believed to derive from the term “moonrakers” used for early English smugglers and the clandestine (i.e., by the light of the moon) nature of the operations of illegal Appalachian distillers who produced and distributed whiskey.”

While moonshine might have been fun to drink, it wasn’t necessarily safe. Making moonshine was obviously not a regulated process and the stills were often low quality, makeshift contraptions constructed from whatever materials were around. One popular choice were stills made from car radiators. Thus, the bottles were easily contaminated from bacteria and chemicals such as antifreeze. To make matters worse, oftentimes the distillers would add dangerous toxins, like Methanol, to their concoction to increase its potency. Many people would actually become very sick after drinking moonshine and in some instances their illness even resulted in death.

Despite the risks, moonshine was always a popular item due to its high alcohol content. Legend also says moonshine bootleggers even used the liquid to fuel their cars. This powerful fuel supposedly made their cars run faster, which helped them evade authorities as they peddled their illegal product.

It’s unclear where this particular moonshine collection came from, when it was made, or who it belonged to. Perhaps it belonged to a Union member or maybe it was a part of a strange Mini Course experiment at one time. Or maybe it even belonged to one of the original construction workers for the Union Theater, who hid his stash away so he wouldn’t get in trouble on the job. Although we will never know the real story behind the discovery, the collection has proved fascinating in and of itself.