Home » History » Terrace Views Classic: How Terrace Chairs Are Made

Terrace Views Classic: How Terrace Chairs Are Made 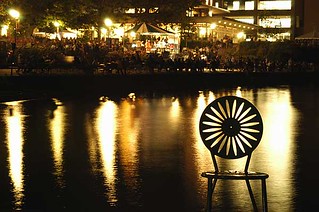 According to Gene Qualmann, yice president of administration and human resources at Wisco, “it was all about timing” that the company was able to manufacture the Terrace chairs for the Wisconsin Union.

When Memorial Union opened its doors in 1928, the chairs on the Terrace were made of hickory. In the 1930s, the sunburst pattern was introduced with the round ring around the bottom,but by 1966, the last manufacturer of the sunburst chairs went out of business and destroyed the tooling used to manufacture the chairs.

In 1979, Union Associate Director Tom Smith became responsible for trying to recreate the tooling for the original sunburst chairs. He contacted former Union Fiscal Director Marty Verhelst, then controller at Wisco Industries,and asked the company to take on the project. In the summer of 1980, Marty agreed to look at the chairs.

“They brought an old, rusty Terrace chair in to Wisco Industries to then vice president of engineering, Pat Swinehart,” said Gene. “He took the chair, threw it around, and noted it was a sturdy chair.” So Wisco engineers proceeded to sit down and copy the chair on a drafting board–but with some improvements. They decided to use a heavier, better grade of steel for the chair. They also added vent holes in the back of the seat along the bottom ring so moisture could drain out, avoiding rusting and allowing the chair to last longer. Wisco Industries won the bid to manufacture the Terrace chair in 1981 and has been producing them for the Wisconsin Union ever since.

It takes Wisco Industries about two months to manufacture a batch of Terrace chairs. The company produces approximately 300 chairs a year, making one batch around February and another later in the year. The process for making a Terrace chair seems complex, but Wisco Industries seems to have it down to an art, as Operations Manager John Brayshaw explained.

Step 1. Raw materials are gathered and prepared to create the Terrace chairs, including steel sheet stock that is sheared down to a size that the punching machine can handle. Then, the sheets are stacked. The arms and legs are cut to adequate length. Wisco Industries produces the seat and backing of the chair,creating its shape and sunburst design. The company purchases the seat and base rings from outside vendors,and also sends the arms and legs to be bent and then returned to the plant. “We used to do it in-house,” John said, “but that’s not our expertise, so we leave that to the experts.”

Step 2. The sheets of steel are loaded and sent through a CNC Turret Press, which is a computer controlled punching machine. The sunburst design is programmed and downloaded into the machine. Special tools-and-dies are used and loaded into particular stations so the program can tell the machine where to punch. The sunburst design is punched into the steel. The Wisconsin Union trademark is stamped onto the bottom of each chair, and the circles are shaken out and sanded smooth around the edges.

Step 3. The seat and back of the chair is formed onto a round ring, and a hole is drilled for drainage.

Step 4. The seat and the back are fixed on the base ring, legs, and arms. The chair is held together, and then welded. After this is finished, the chair is complete and ready to be shipped off to be painted.

Step 5. All Color Powder Painting, also in Oregon, WI, paints the chairs their signature green, yellow, and orange hues. Retail chairs are painted red or white. Color Powder Painting uses an electrostatic metal painting process. After the chairs go through a wash operation to clean them, an electrostatic charge is created that causes the powder to cling to the chairs. Then, the chairs are baked at 400 degrees Fahrenheit. The heat turns the powder to liquid, painting the chairs. The chairs are then cooled. John said this whole process takes approximately two hours and is environmentally safe.

“UW is an icon, a tradition,” John said. “Being a tiny little blip involved in it–it’s something to be proud of. It’s a tremendous opportunity.”

Gene, who earned an M.A. in public policy and administration from UW-Madison in 1976, also said he spends some time on the Terrace and knows how important the Union Terrace and its chairs are to the community.