Wisconsin Union Theater’s Name A Seat campaign has generated numerous personal stories affiliated with the Union Theater over the years.  Many campaign donors, who receive an engraved plaque on a seat, share an intimate connection with the Theater, including Memorial Union Building Association associate trustee Bill Niemeyer.

Bill Niemeyer and his wife Allison Duncan are all smiles with Bucky at Union South before a Badger football game.

For Bill and his wife Allison, there were many reasons to donate to the Memorial Union Reinvestment because of the involvement and memories that have transpired throughout their time spent at the University of Wisconsin-Madison.

“I was involved in Hoofers as a student and as a lifetime union member and I’m currently serving on the Memorial Union Building Association. The Name a Seat campaign is a good cause for a historic theater,” Bill said.

Bill played trombone in the UW Summer Music Clinic in high school and in Symphonic Band while attending the UW.  Both offered him the opportunity to perform onstage at the Memorial Union Theater.

Some of Bill’s favorite UW memories include being involved in the Hoofer Sailing Club, attending Friday night sailing socials and spending time on the Terrace watching live music. He was Commodore of the sailing club in 1998-’99 as was also involved with Hoofer Council and the Hoofer Riding Club. 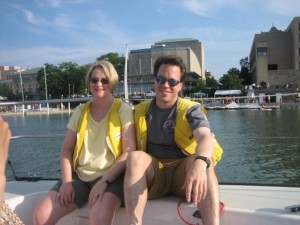 Allison and Bill get comfortable while sailing in front of the Memorial Union Terrace.

“In the late 1990s, the riding club needed to switch their stable location, and they asked some Sailing Club members to help build stalls, fencing and a kick wall at new stable during the off-season, so I thought ‘hey, I should volunteer to help and also learn how to ride,” Bill said.

Bill and Allison share a particularly special moment concerning the Union.  Their first date was to the 1998 Commodore’s Ball in Memorial Union; they wed in 2001.

“I have a lifetime of memories at the Memorial Union and hope to have many more.  My wife and I always enjoy visiting both Unions when we are in town.”  Bill and Allison currently reside in Vancouver, Washington.