It all started with a missing map.  Depicting a birds-eye view of Lake Mendota, a map had hung in the Hoofers Chart Room which instructors would use to point out relevant landmarks. But during the Memorial Union Reinvestment construction, the map disappeared. There were no concrete plans to replace it, until Caroline Rose stepped in.

“A Hoofers advisor contacted me in April of last year asking if I’d be interested in working on a project to replace the old map,” said Caroline, a Hoofers member since 2009 and UW grad with a degree in geographic information systems and cartography, now continuing as a UW master’s student. “We needed something else to serve the same function, and it eventually snowballed into an art piece to give the Chart Room some character.” 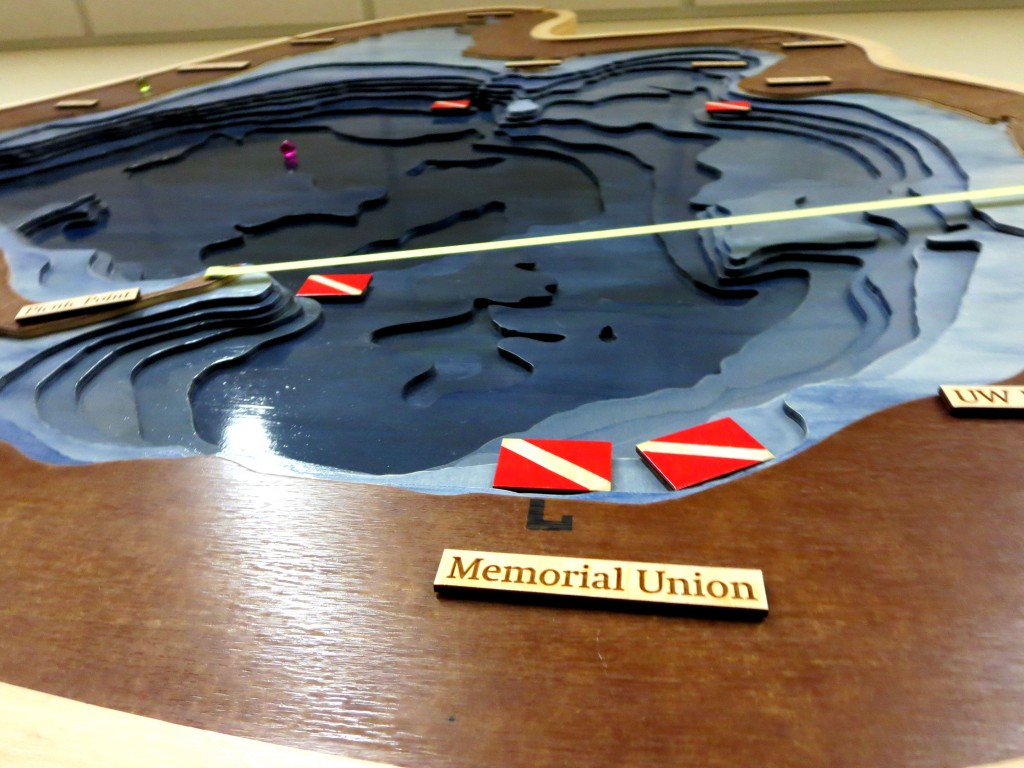 Caroline spoke with the Hoofers Sailing, SCUBA and Outing Clubs. Different people wanted different features. Ideas were thrown around–another aerial poster, maybe a whiteboard. Caroline’s notebook was brimming with concepts for the map until she settled on a certain one that stuck–literally. 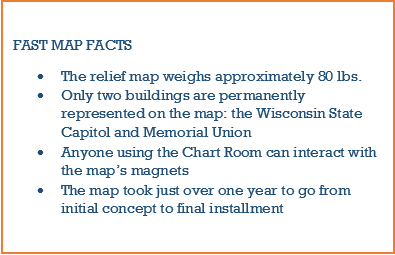 The 3-D relief map features interactive magnets that label everything from key locations on Mendota to Hoofer SCUBA dive zones. “With a magnetic map, we wanted to leave it open to modify however people want,” Caroline explained.  There are even extra magnets to mark certain spots–I got to place a magnet on a spot near Picnic Point I like to visit with friends to go swimming.

Creating the map was no easy task. Caroline received plenty of assistance, especially from Sector 67, a nonprofit community workspace that provided her with the tools used in making the map.

“Sector 67 is like a gym membership for people who like to build stuff,” Director and founder Chris Meyer explained. “Caroline first joined to make a relief map book project, and eventually the chart map replacement project grew two legs and turned into this giant wooden relief map that she used Sector 67 equipment to create.” 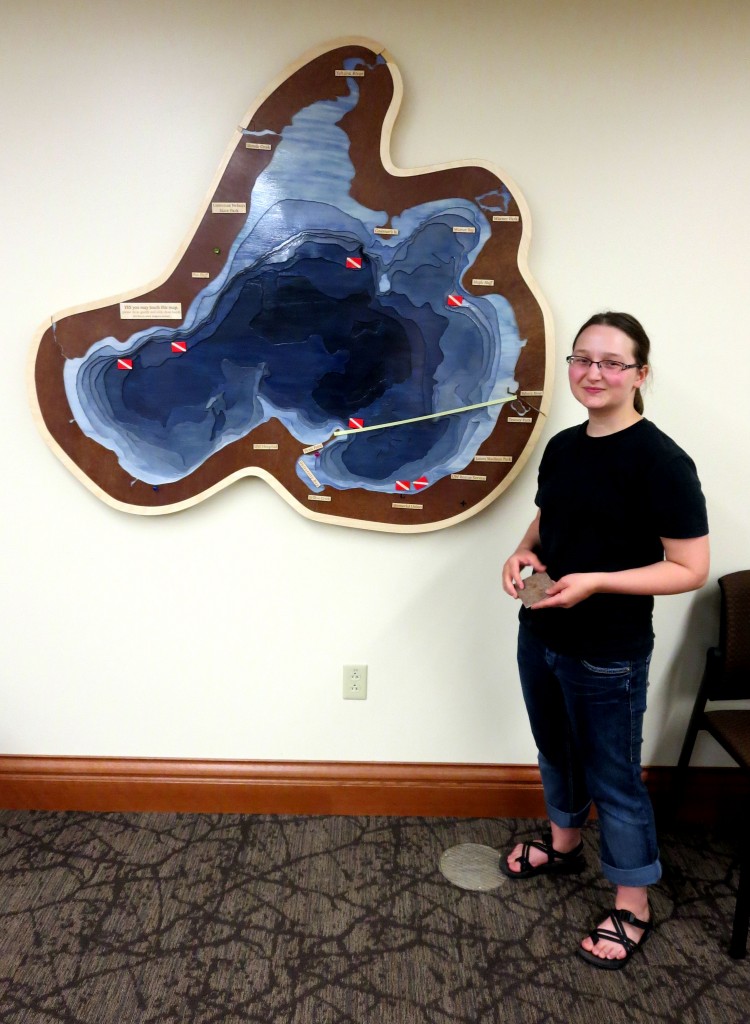 Caroline Rose stands with her finished creation on display in the Chart Room.

The map’s layers are composed of Baltic birch plywood and Chemetal magnetic laminate, the material that gives the map its magnetic surface. A CNC router at Sector 67 allowed Caroline to precisely cut out the lake’s depth layers and the text label magnets.

“The typeface we chose struck a nice balance between readability and style,” former Hoofer Outing Club Vice President Eric Oberhart said. “It’s easy to read, but also has the air of authority and age that complements the map’s wooden, handmade character.” Eric collaborated with Caroline to choose the magnetic labels’ typeface and eventually determined the layout and size that best fit the map.

What was once a mere sketch in Caroline’s notebook grew into an informative and interactive apparatus that Hoofers and Outdoor UW will use for years.

“We made available the tools and knowledge of how to use equipment, but Caroline paved her own path,” Chris said. “Our space depends on what people get out of it and what people bring to it, and her motivation and energy sucked people in. It was a really cool project.”

Learning new skills was one of Caroline’s big takeaways from the map’s creation. “Becoming competent with all the different tools during the process, as a craftswoman, was really great for me because I hadn’t used some of this stuff since middle school shop class,” Caroline said. “I never would have approached some of the equipment without this purpose driving me.” 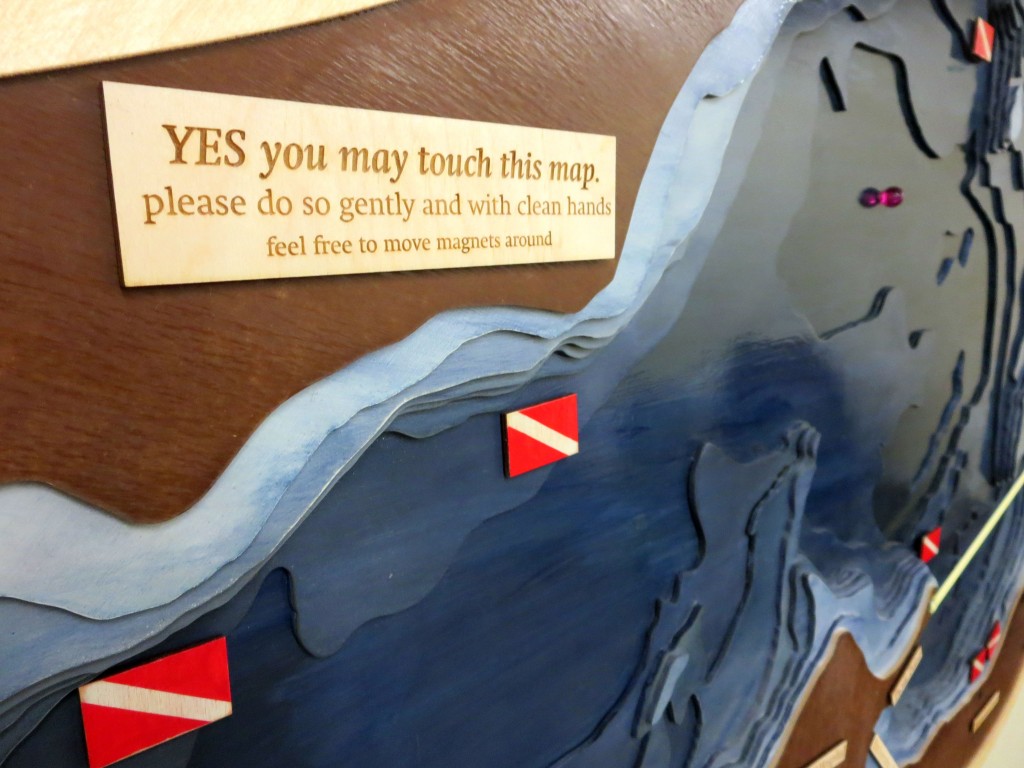 Caroline and those involved hope the map will be a fun and useful learning tool that appeals to a number of different users, especially their own organization, as the map was ultimately made by Hoofers, for Hoofers.

“We’re part of the campus, city, state and world as a whole,” Eric said. “I hope seeing the map, with its tiny label for the Union on the vast Lake Mendota helps people appreciate the place and space in which we recreate, as well as our connections to the greater world.”

What do you think of the Chart Room’s newest edition? Share your thoughts in the comments section below, and click here to watch a video showing the lake’s laser cutting process.