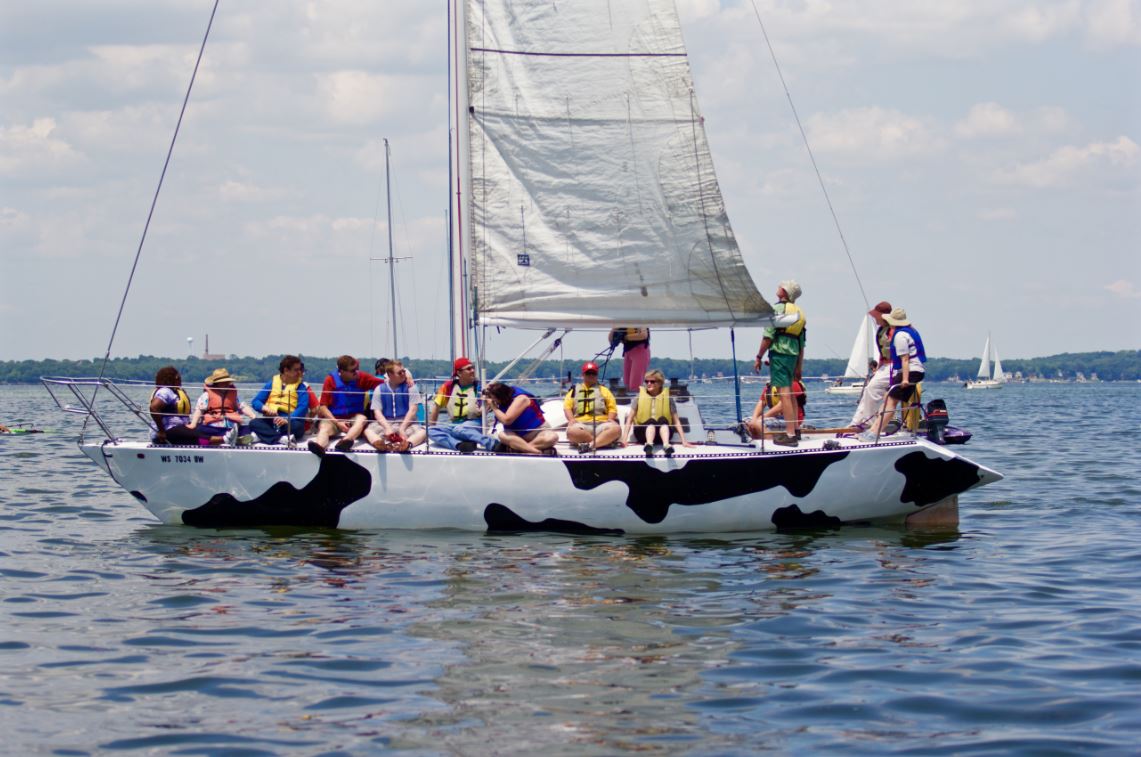 The sun rises on Lake Mendota as Michael Beil, a quadriplegic, takes on a new adventure. The Hoofers Sailing program has given Michael the opportunity to sail alongside an instructor as part of their adaptive membership.

Michael is the first quadriplegic to sail with Hoofers and as a pilot, he has helped Hoofers learn and grow out the programming for future athletes.

Dave Elsmo, the Hoofers Sailing program manager, said the Bessmen Foundation has given Hoofers scholarship money to provide no cost programming for people with any type of disability, cognitive or physical.

Dave worked with Special Olympics in Minneapolis and found it fun and enjoyable. He took this experience forward and reached out to the Wisconsin chapter. Now, Special Olympics Wisconsin (SOWI) hosts two events a year with Hoofers. Every June, approximately 40 to 60 athletes and caregivers join Hoofers out on Lake Mendota for many, to sail for the first time. While in September, there is a little bit of competition with a pursuit race taking place between SOWI athletes.

“Feedback from athletes has been all positive,” SOWI Regional Athletic Director Don Wigington said. “This is a tremendous opportunity for athletes because it is something they can’t normally do.”

Sailing is a popular sport offered by the Special Olympics nationwide, but until the partnership between Hoofers and SOWI, nothing was offered in Wisconsin.

“This is the fifth sailing season I have worked with Hoofers, and we have always said we have an adaptive sailing program, but it basically just existed on the website,” Dave said. “After contacting the local chapter, Bob and Don said they were very interested and have been extremely helpful in organizing and getting athletes to participate.”

“Hoofers is very enthusiastic about what they do,” Bob said. “They have worked so well with our athletes.”

Whether SOWI athletes want to play an active or passive role on the water, Hoofers instructors have been able to support the athletes and accommodate the experience. Athletes have been involved by either moving the sail or steering, while others have enjoyed sitting back.

Dave’s goal for this year is to figure out what the limitations of the program are now, so they can fill in the holes. Safety is the biggest concern, but after Hoofers purchased a mobility restriction chair for athletes will no upper or lower body strength, setting sail is a lot more safe.

According to Bob and Don with SOWI, some athletes have shown interest in classes on a regular basis.

“This really has the potential to grow,” Bob said. “Even if it doesn’t grow, it is completely worthwhile and something that athletes don’t have the ability to do besides this connection.”

“It’s probably one of our most fun times to instruct,” Dave said.

Hoofers has a unique element of community outreach, something that many other programs lack. This focus helps to find the right situation for many disabled athletes.

Hoofers Sailing utilizes a “Skipper & Navigator” model in which the “navigator,” a caregiver, family member or friend, sets sail with the athlete (“skipper”) and a Hoofers instructor. The navigator plays an important role because they understand the athlete’s needs and limitations best. The navigator is also able to provide ideas on how to adapt the Hoofers program for the athlete.

Hoofers assigns very skilled sailors to work with the skipper and navigator. Because their disability is usually so unique and diverse, it is difficult to gain specific training to work with the athletes until you meet them, Dave said.

The Hoofers team loves to work with others, but the partnership with SOWI and the adaptive membership, is “probably one of our most fun times to instruct,” Dave has said.

Gabrielle DiBenedetto is a UW-Madison junior double majoring in Journalism and Economics. She can be seen studying or chatting with friends in the Sun Garden at Union South with a bowl of Babcock ice cream.