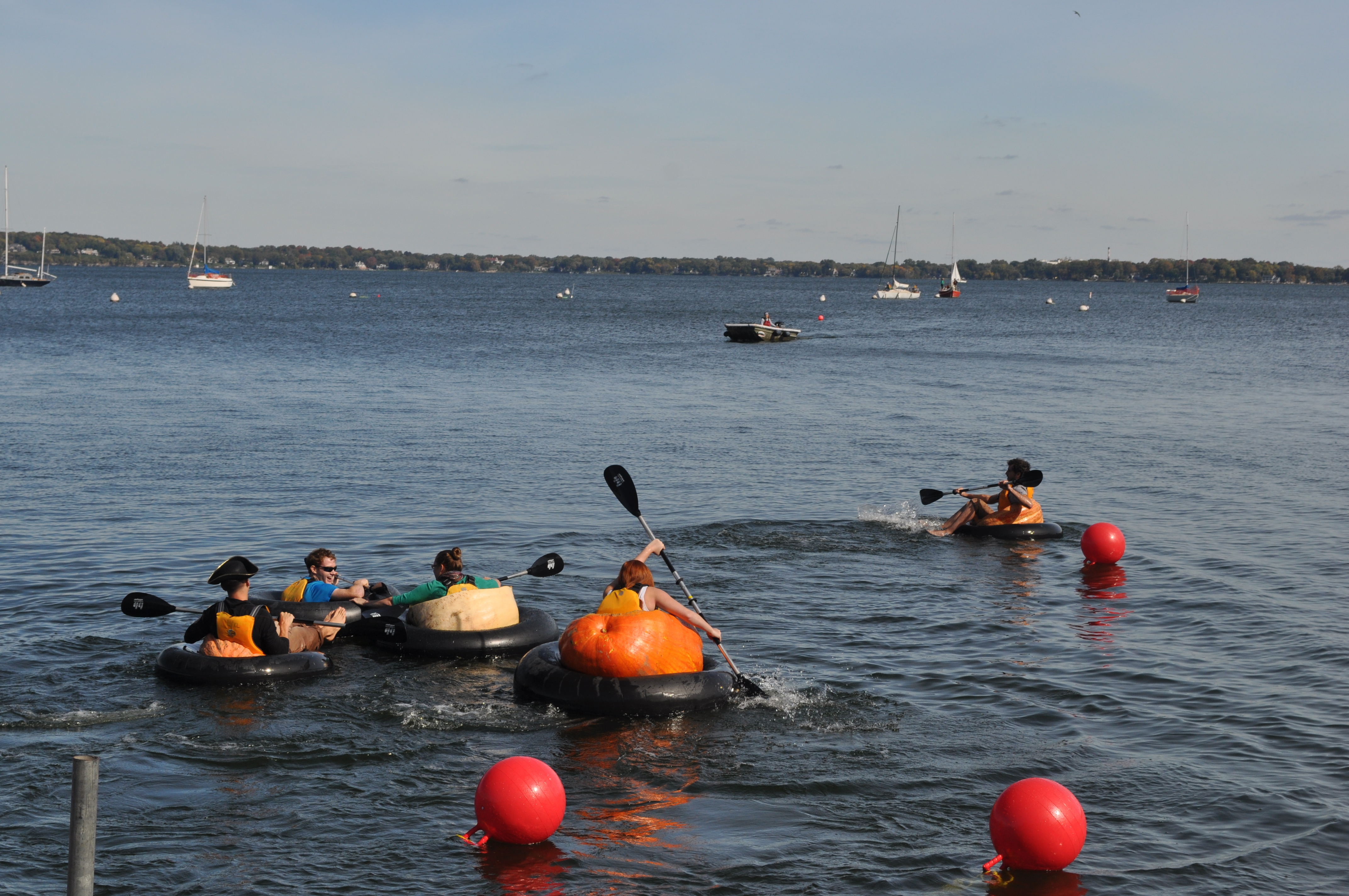 “Pumpkin-pilots” race on the open seas.

Some people know it’s Fall when brown leaves start covering their yards. Others know it when they draw a crisp breath of autumnal air. For Hoofer members however, it’s the sight of massive floating pumpkins dotting the shore of Lake Mendota.

The Giant Pumpkin Regatta celebrated its tenth year at Memorial Union on October 10th, with dozens of participants braving the chilly waters of Lake Mendota in PFDs: Pumpkin Flotation Devices. Even more onlookers cheered and laughed as the canoers tried to navigate around checkpoints in order to finish in first place.

In 2005, Hoofers partnered with the UW-Madison Horticulture departments to set pumpkins to sea by using gourds grown by UW horticulture students themselves. Since then it has become a community event, signifying the arrival of Fall in the most delightfully ridiculous way.

Giant pumpkins are transported to the Wisconsin Union, where they are hollowed out and placed in black inner-tubes. The rafters, also known as “pumpkin-pilots,” sit in the middle of the hollowed-out pumpkins and attempt to paddle their vessel around the course. 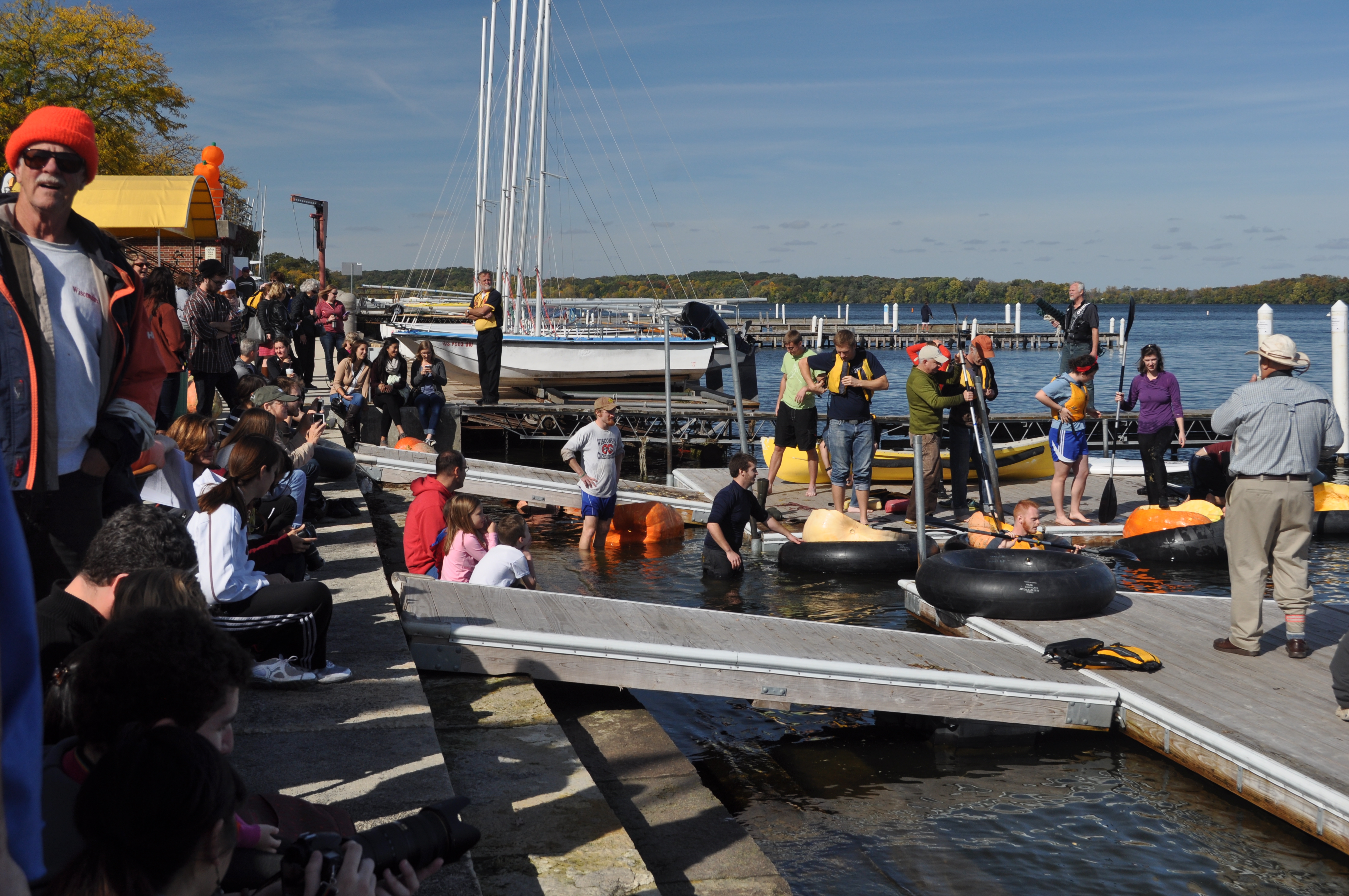 Crowds look on as contestants prepare their rafts for the race.

This year, the races were held in several heats officiated by Jim Nienhuis, UW-Madison Horticulture Professor. He excitedly announced the state of the races to the onlooking crowd, shouting announcements such as, “We have a pumpkin overboard!” and, “The winner gets a hug with Jim!” When asked for a quote about the races, he simply stated, “If you have a wet butt, you’re a winner.” Those with wet butts were winners indeed, as every contestant left their pumpkin with beaming smiles and pants soaked in pulp and lakewater.

As with any event of this magnitude of silliness, there were mishaps and slip-ups amongst contestants that led to laughter throughout the crowd. One racer’s pumpkin slipped through his raft halfway into the race. He was forced to bump the gourd back to shore with his paddle in a similar manner to a seal pumping a beach ball. Though there were semi-frequent tipovers and tumbles, all of the contestants finished the course with unbridled enthusiasm. 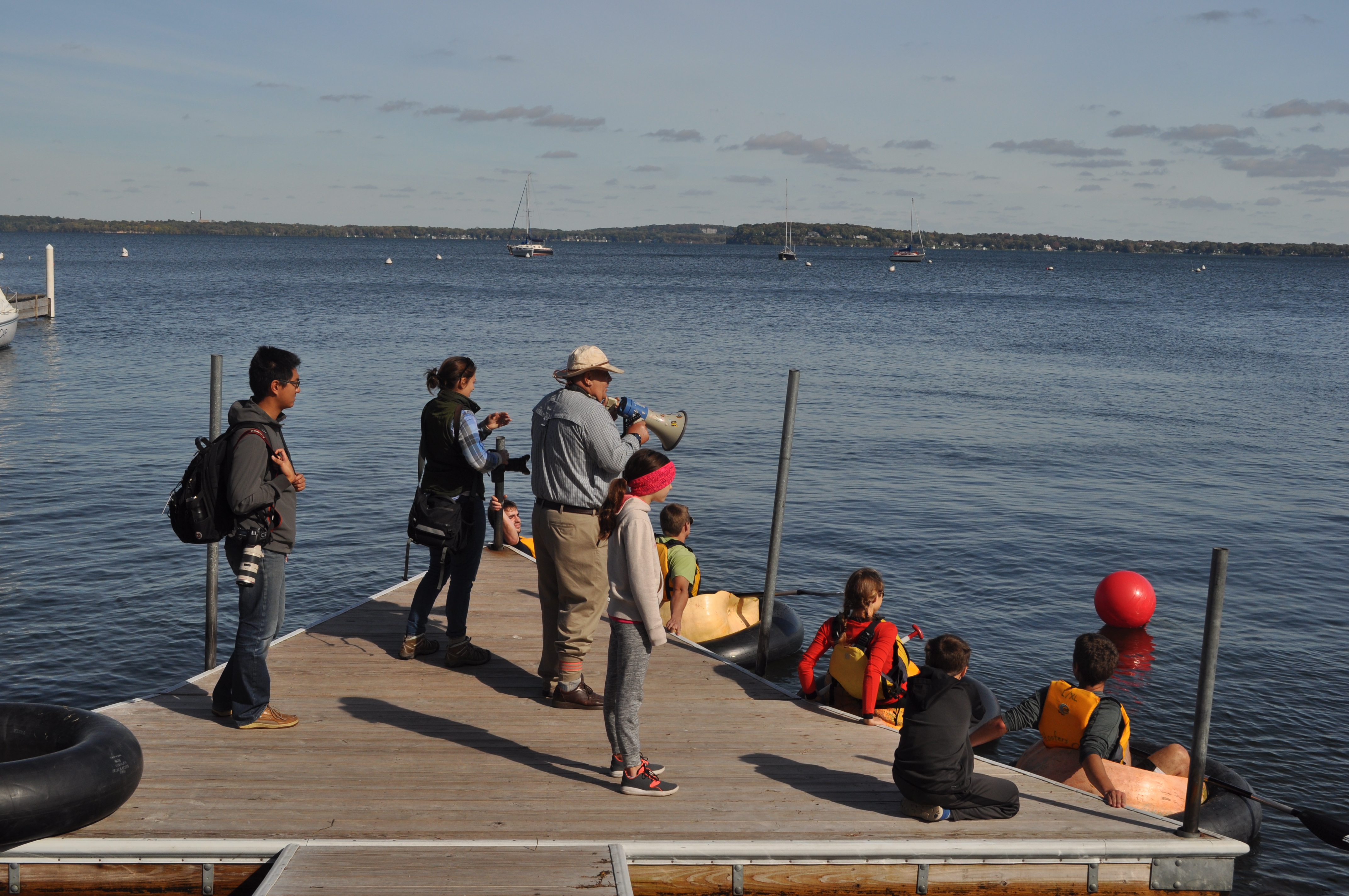 Rafters ready their pumpkins for one of the many races of the day.

Jonathan Bauer, a first-time pumpkin-pilot and winner of his heat, had some words of advice to offer for future racers.

“I was a little worried I was going to tip over, but it’s pretty stable once you’re in there… the key is that you have to hunch over, the pumpkin traps you in there and you gotta find a way to get out and paddle.” On the overall atmosphere of the race, Bauer said, “It got pretty competitive, there was some jostling at the beginning… overall though it was super fun.”

Though Bauer touched on the competitive aspect of the race, it’s worth mentioning that the only tangible prize offered during the event was a congratulatory celebration from the amiable Nienhuis. For many, the pure pride of winning a race within the confines of a pumpkin was enough of a motivator to get out on to the water.

After the races had concluded, Karla Stoebig, one of the main organizers of the event,  decided to ride a victory lap around the course with her chihuahua adorned in a pumpkin costume. Together, they paddled around the course while the crowd looked on and cheered. It was the perfect end to an absurd morning: a dog, dressed as a pumpkin, riding in a pumpkin on Lake Mendota in the middle of October.