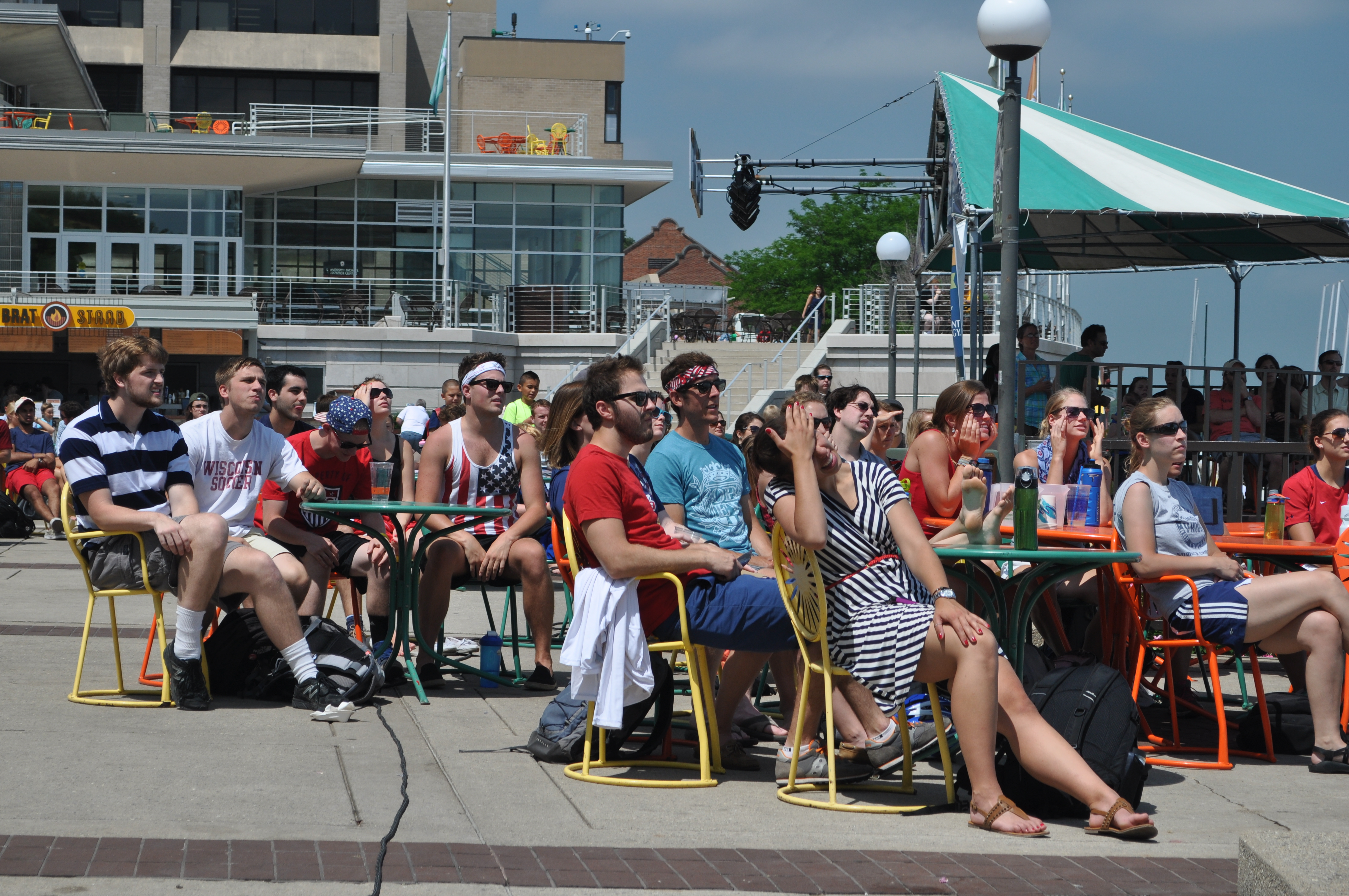 For soccer superfans and summer thrill-seekers alike, local restaurants and bars throughout the city of Madison have become hotspots to gather and watch the 2014 FIFA World Cup. With both The Sett in Union South and Der Rathskeller in Memorial Union showing as many matches as possible, both of these venues have garnered a considerable following over the past weeks.

“We wanted to offer the campus community a home for the entire tournament,” said Union South Program Director Robin Schmoldt when asked about the overall goal of showing the World Cup games in Union South. “With the time zone difference being so favorable, we can show every game, every day.”

With every game showing every day, both Union South and Memorial Union bring fans of all ages and nationalities together to watch the games and cheer for multiple teams. We chatted with a few different soccer lovers in Memorial Union—whom were watching the Italy vs. Uruguay and England vs. Costa Rica matches Tuesday morning—to find out what teams they were rooting for throughout the World Cup. When asked about who he was cheering for, Union member and Madison native Michael Torrence responded, “Well, because I’m American I’m cheering for the U.S.A., my mom is from England so I’ve been cheering for them, and I lived in France for a year, so I’ve been cheering for them as well.”

Paola Mallucci, an Italian professor in the Wisconsin School of Business, has so far been cheering exclusively for her home country. Mullucci added, “Germany and Netherlands are pretty good, so at some point [if Italy is eliminated] I might have to cheer for them.” 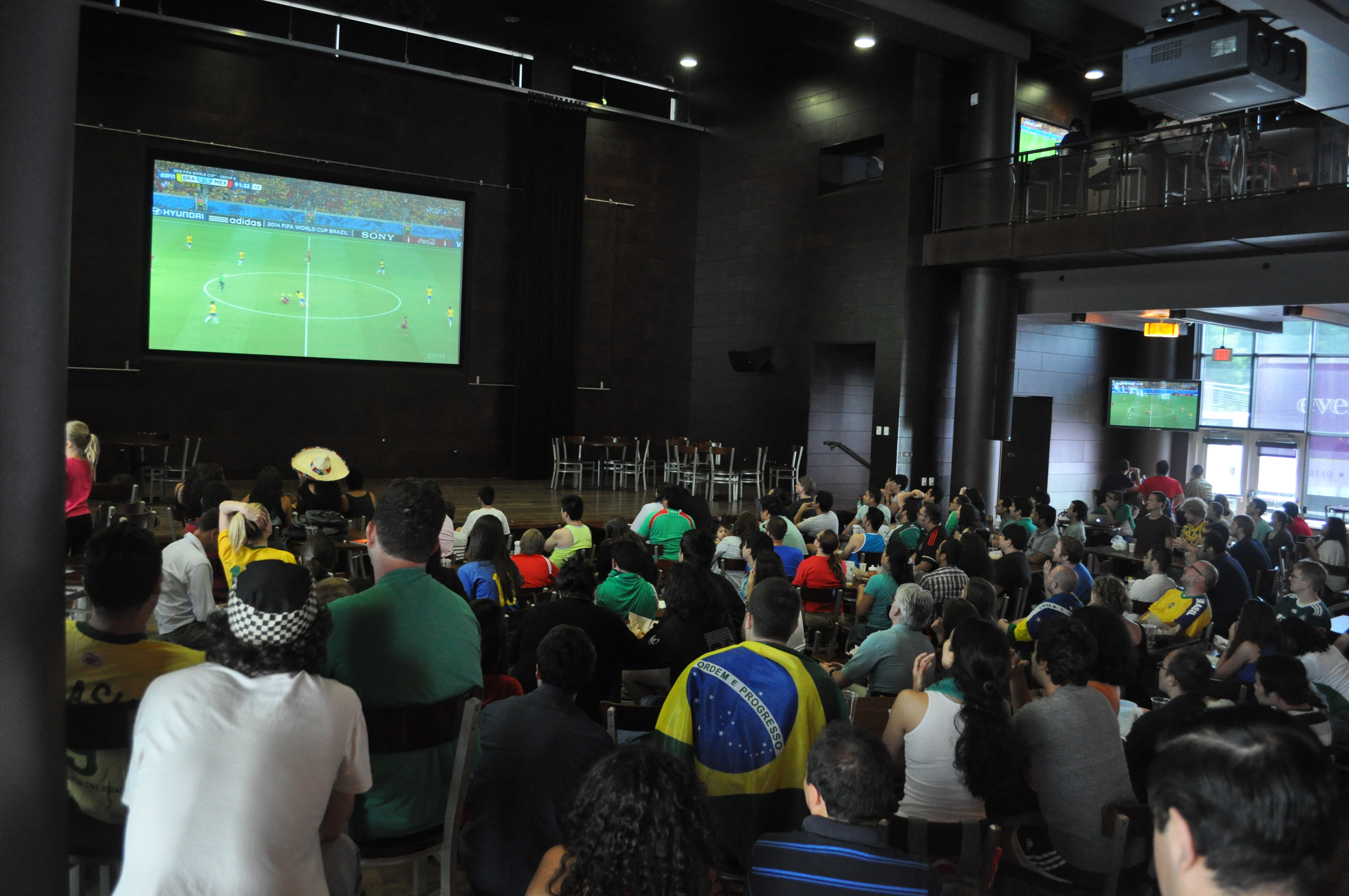 The U.S. soccer team has held their own in this World Cup’s exceptionally competitive “Group of Death,” adding further to the level of excitement around the sport in Madison. The U.S. defeated Ghana 2-1 in their first match of group play, and took an unfortunate draw with Portugal due to a Christiano Ronaldo-assisted goal in the match’s final seconds. Despite a 0-1 loss to Germany Thursday afternoon, the U.S. Men’s National Team will be moving on to the knockout stage of the tournament due to an advantage in goal differential.

“The energy during any given match is infectious,” says Robin of the World Cup so far. She compared the viewing of the games to that of Badger football games and the NCAA tournament in March and April. Given the testimony of other World Cup watchers in The Sett, they think the same way. When I asked front row Sett spectator David Hamilton about his favorite part of watching the World Cup, he responded, “The atmosphere and the passion; coming together to cheer for the U.S. is great.” Fellow front-rower Scott Oelrico added, “It helps that soccer is growing in popularity.”

Excitement figures to build beyond the group stage and U.S. matches, as the knockout stage (beginning June 28) becomes a single elimination tournament where winning is the only option. The Sett and Der Rathskeller will both continue to show World Cup matches through the championship on July 13, including the next U.S. match where they take on Belgium this Tuesday, July 1.

What have you been the most excited about in this year’s World Cup? Share your comments and World Cup experiences below!