Home » Memorial Union Reinvestment » A Place to Innovate: Doubling Down on Design

A Place to Innovate: Doubling Down on Design 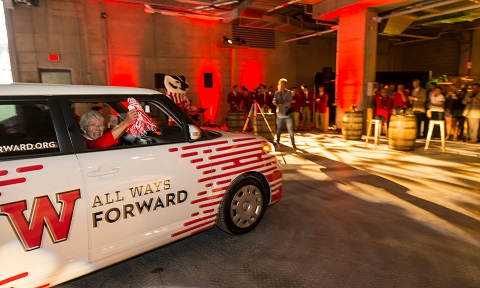 One of the most significant, recent changes to Memorial Union was the installation of a subterranean loading and receiving dock, constructed underneath the grassy oasis of the Wisconsin Alumni Association’s Alumni Park.

“We needed a controlled space we could use for all of our service points, and all the other pieces that fit into the daily operations of the Union,” said Paul Broadhead, assistant director for facilities management at the Wisconsin Union.

Previously, the loading dock, which currently accommodates more than 400 deliveries per week, lived above ground in a parking lot to the east of Memorial Union. This sometimes caused congestion on Langdon Street and was inefficient. Moving the operation underground solved both problems at once.

The new, underground dock can accommodate a 52-foot truck. The loading bay was fitted with a brand-new, custom-built, locomotive-style rotating turntable, built right into the floor of the loading bay.

Now, vehicles have an easy and efficient method to enter and exit the dock, speeding up Union deliveries.

To increase the efficiency even further, Broadhead said, the Wisconsin Union team automated the process of using the loading dock.

“When a vehicle enters, they come up to a gate. Then, they swipe their campus ID, or they call the dock manager who opens the gate for them,” Broadhead said. “They go down the gate, and that triggers the overhead door at the bottom to open, and they get on the turntable. It’s all tracked, so you never overload the dock.”

The Union team also used a systems approach with other aspects of the renovations, such as the security of back-of-house operations. For first, second and third shift staff, having a secure space to work is paramount.

The Reinvestment project added a new security measure in the building to secure back-of-house areas with key-card access, preventing guests from entering work areas, such as the loading dock.

During the renovations, the Union team also took a hard look at the existing 36 different mechanical units in Memorial Union, such as the heating system spaces and environmental control units. A large goal during the construction, according to Broadhead, was to consolidate those units.

Now that the project is nearing completion, those units have shrunk from 36 separate spaces into 20, a significant gain in terms of square footage. The new operating systems are also 30 to 40 percent more efficient than current
building codes require.

Memorial Union is on track to receive a silver certification from Leadership in Energy and Environmental Design, a system created by the U.S. Green Building Council to evaluate a building’s environmental performance and sustainability.

These and so many other behind the scenes improvements to the Memorial Union will help ensure that this campus icon will continue to serve the campus community for generations to come.