Following four months of renovations and restorations as part of the Memorial Union Reinvestment (MUR), Der Stiftskeller has reopened and is ready to welcome back patrons. The upgrade brought the area up to code as well as reconfigured the bar to improve customer service. Still, the space’s iconic charm remains­—as the classic wooden tables, replete with initials and doodles carved into them over the decades, rustic light fixtures and whimsical murals return.

Der Stiftskeller patrons will find familiar faces watching them. The jolly gnomes on the murals German-native Kurt Schaldach painted in 1978 are back.  This includes perhaps the most popular one, “The Battle of Beer and Wine,” which resided on a panel, so it was ready to return to Der Stiftskeller, albeit to the south rather than the west wall. 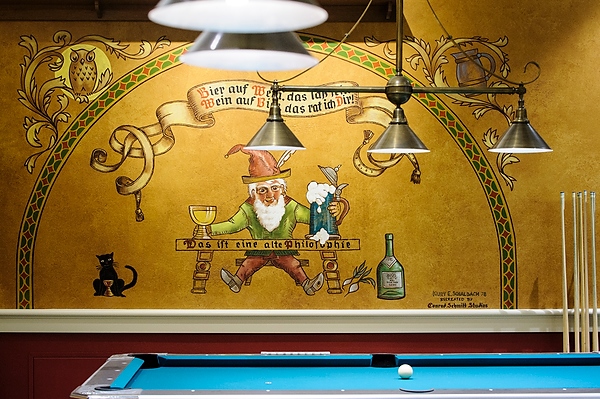 Hand-painted wall murals are pictured as part of the completed renovation of Der Stiftskeller in the Memorial Union.
Photo courtesy of Jeff Miller/UW-Madison Communications

The murals not on panels had to be restored from scratch by five artists from Conrad Schmitt Studios of New Berlin, Wisconsin, who spent four weeks on-site painstakingly recreating the murals with incredible details.

“Because of my familiarity with these murals and this building I had an added motivation to do them justice,” said lead artist and UW-Madison alumna Dave Andrews.  “It was my intent to have us match the free-flowing and expressive characters stroke for stroke and execute perfect copies.”

The beer steins that have adorned shelves just below Der Stiftskeller’s ceiling for nearly 40 years won’t return along with the murals just yet.   Union staff removed and carefully crated them for safekeeping from construction vibrations during development; the steins will return when MUR concludes.

When the steins return they will sit atop a piece of history that predates Memorial Union itself.  Before MUR began, a decaying white oak tree was removed, but the wood was saved and repurposed into those shelves as well as the new bar.

Paul Morrison, founder of The Wood Cycle in Oregon, Wisc., sawed, dried and milled the wood of the oak tree that would eventually become the Der Stiftskeller bar.

“When I heard they had to take down a tree, my fear was it would be cut into fire wood and disappear, but I was happy it was used this way and it was just plain fun to be a part of the process,” Paul said.

As a UW-Madison alumna and lifetime Union member, Paul’s involvement in the project held significant meaning to him.

“My wife and I were married there and had our reception in Tripp Commons so this is a special place,” Paul said. “Working on something where you know the history … we asked ourselves how we could cut this wood to best represent the historical look.”

“When you renovate a historic building, it’s important to make sure the new components feel like they belong,” said Boldt Co. project manager and UW-Madison engineering alumna Melanie Taylor.

A series of decorative railings that cordoned off the darts area by the north wall now support stanchions in front of the bar that serve as either space for patrons in line or standing service areas.

“Our number one focus was preserving the feeling of the space that so many Union members are familiar with,” said Guthier.  “We also knew we could improve service and our design and construction teams did an incredible job accomplishing both of those goals.”

“Patrons will be able to get through the line quicker and get back to enjoying their time on the Terrace or in Der Rathskeller,” said Restaurant Division Director Jim Long. 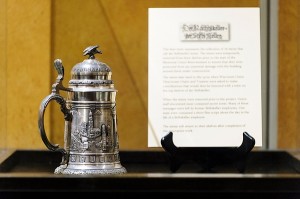 A vintage beer stein is on display. Over 70 steins will return to Der Stiftskeller once MUR construction is complete.
Photo courtesy of Jeff Miller/UW-Madison Communications

Service to the Terrace will also improve when two new service windows will begin operating.   Also, the quality of beer available will increase as well.

“We have added more craft and local tap beers available,” added Long. “More than half of the beers on our menu are brewed right here in Wisconsin.”

For a PDF of a booklet detailing all the murals in both Der Rathskeller and Der Stiftskeller, click here.

For background video of an interview with arborist and forestry professor Bruce Allison concerning the extent of decay of the white oak on the Terrace, click here.