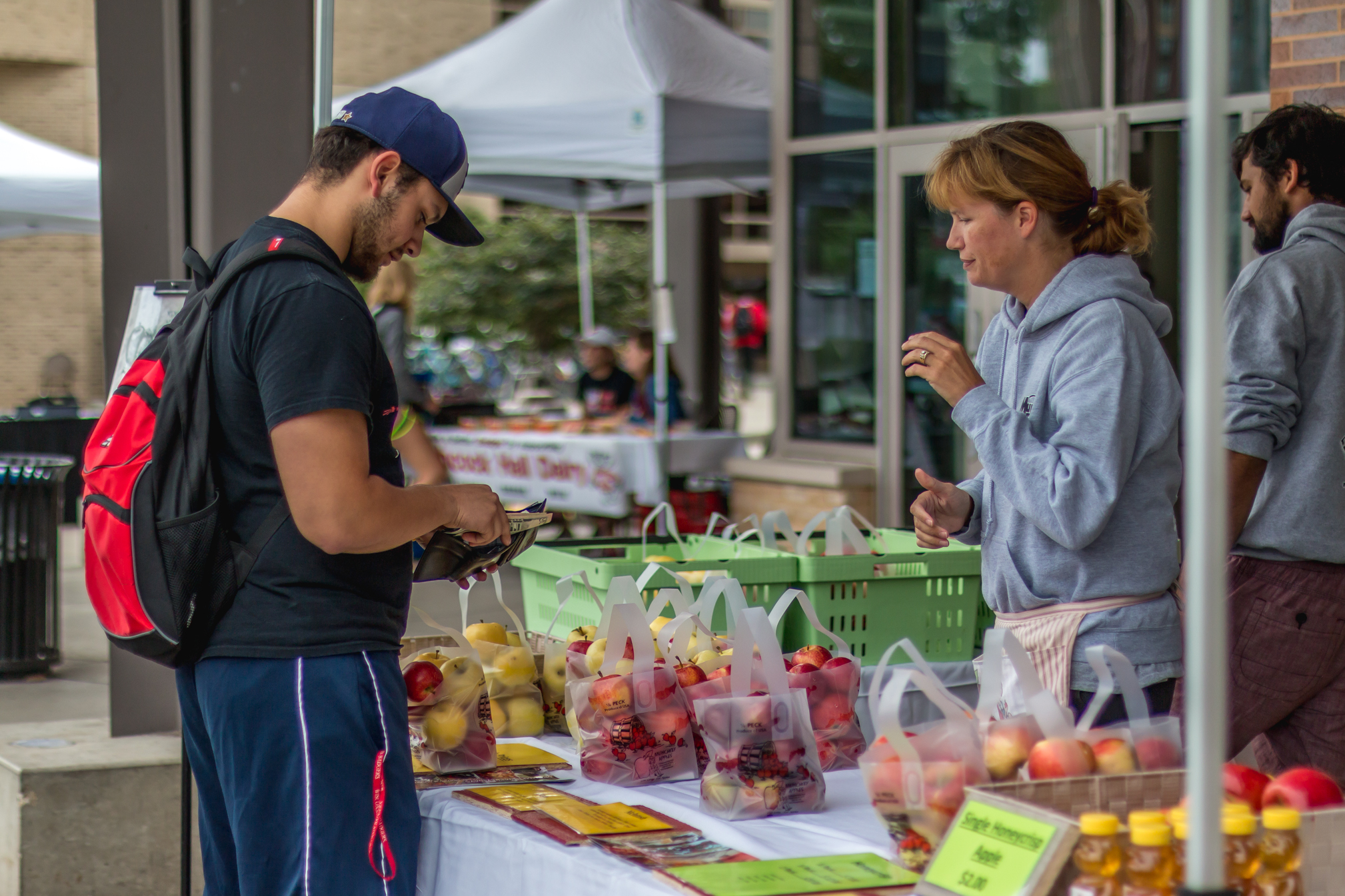 A student purchases locally grown apples from a vendor at the Campus Farmer’s Market.

Along with beautiful fall colors comes the bounty of the fall harvest. In Madison, much of the product of the harvest lives right in our backyards at local farmer’s markets. The Campus Farmer’s Market, held at Union South, has been a way for UW-Madison students to take advantage of that fall harvest abundance.

Since its inception in 2013, student leaders have coordinated the market. This year, senior Caroline Patz, the dining services student project manager, has taken the reigns to continue it on a road of success. Patz’s overall goal was to gain broader campus awareness for the event in order to see bigger attendance numbers. Patz was also careful to select vendors who offer a variety of product that would appeal to students. This year, the list of vendors included Munchkey Apples, Tummy Yummies, Babcock Dairy Hall and Savory Accents, among others.

“We are really trying to diversify the product to appeal to the students,” Patz said.

Carl Korz, Dining Services Director at the Wisconsin Union, said he is proud of the work that Patz has accomplished so far, and that he values her ability as a student to take on such a major project.

“It’s really about student development and that third component of learning which is not the formal, technical approach in the classroom,” Korz said.

Patz is studying Pharmacology and Toxicology to become a pharmacist. While farmers markets and pharmacies may not necessarily go hand in hand, Patz says that she has learned a lot of essential and transferable skills through her position.

Student leaders like Patz have guided the Campus Farmers Market to become a resource for students to have convenient access to locally grown fruits and vegetables. Over the years, the market has also expanded its purpose to include information about local agriculture healthy food choices. Groups like F.H. King, a sustainable agriculture student group, will sometimes set up a booth to inform attendees about their events and projects.

“This is really meant to be an amenity for campus,” Korz said.

Lilly is a UW-Madison senior studying strategic communications and reporting in the Journalism school and is completing a certificate in digital studies. You will often find her studying or spending time with friends in the various nooks and crannies of Memorial Union with a heaping bowl of mocha macchiato Babcock ice cream.