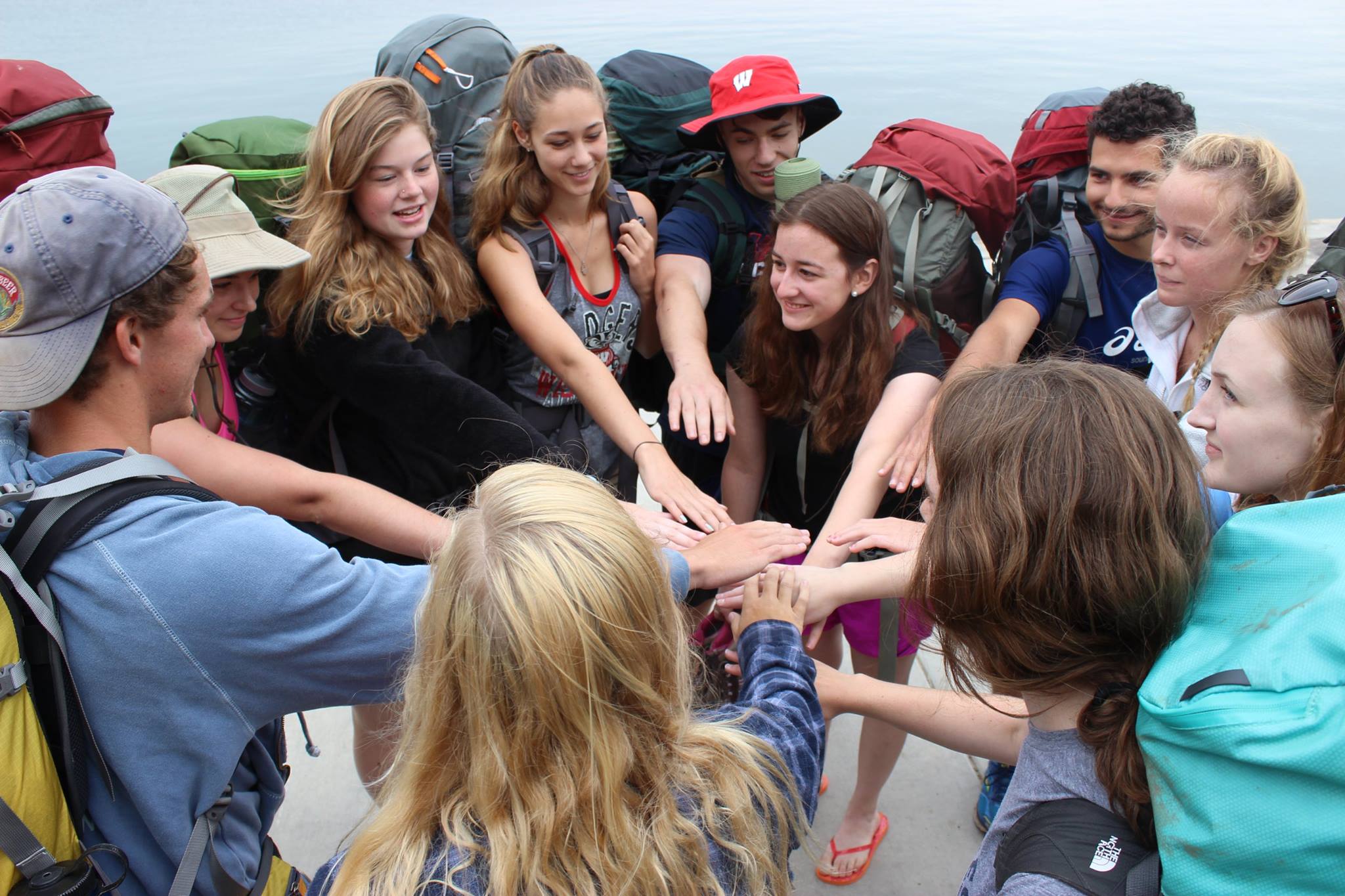 A Basecamp crew brings it together before their journey starts. Photo courtesy of Wisconsin Basecamp.

A tent, a propane stove and hiking boots aren’t typical for a back-to-school list, but for incoming UW-Madison freshmen and transfer students participating in the Basecamp program at Outdoor UW, these items are essential for starting their first year in Madison on the right foot.

Every summer, Outdoor UW organizes several outing trips for soon-to-be Badgers. Basecamp assists freshmen in meeting fellow students before they arrive on campus in the fall during an incredible outdoor experience.

On the afternoon of August 11th, one group returned from their incredible journey down the Wisconsin River. It was difficult to tell they traveled 60 miles over four days given the energy with which they exited their trip van. As the group hauled their gear back to the Outdoor UW office, they engaged in excited conversation with bright smiles about the weekend’s activities.

“There were so many eagles and the stars were amazing,” Basecamp attendee Nate Jones recalled. “There was one night where we laid on the beach and put our heads in a circle while we all told stories. We watched the stars overhead.”

For the students, canoeing was only a vehicle that helped them reach a much bigger goal: preparing for the brand new world of college. The trip was the first time many of the students had interacted with other freshman, and for some it was the first time they met their roommates in person, as was the case with Raina Eddy and Jenna Langmeler. Raina explained, “We only ever talked over social media. I’m glad I met Jenna this way instead of showing up on the first day of move in and being like, ‘Oh, hi!’”

For most incoming freshmen, the biggest fear for going off to college lies in the anxiety of seeking new friends. Knowing that every other freshman has the same hopes and worries was one of the most bonding aspects of the whole trip according to Jones.

“It was so good because a lot of us are different from each other, but we all are still able to be friends and do this trip together. A lot of us have the same fears like not making friends or not being in the same major.”

The leadership at Outdoor UW was excellent in offering advice and confidence for the upcoming year, as they found themselves in the exact same position only a few years ago.

Sarah Meyers, a current Basecamp leader and UW-Madison senior, recalled, “Most of my worries when I went on my Basecamp trip were about who I was going to meet, and my trip made me way more excited than scared for my Freshman year. [My Basecamp crew] know each other really well now, so they have twelve other people to talk to if they ever worry about anything.”

On the last night of their trip the Outdoor UW leaders asked all of the campers to write their biggest fears on pieces of paper which were then subsequently tossed into that night’s campfire. As the papers burned, so did the anxiety of being at a college away from home with thousands of new faces to meet.

The freshmen gained invaluable knowledge over the four day paddle. Some learned how to light a portable stove, while others became aware of some UW programs including Outdoor UW and Outdoor UW. But all of them learned that their first year of college is not as scary as it once seemed, and that they now have other friends going into it with them.