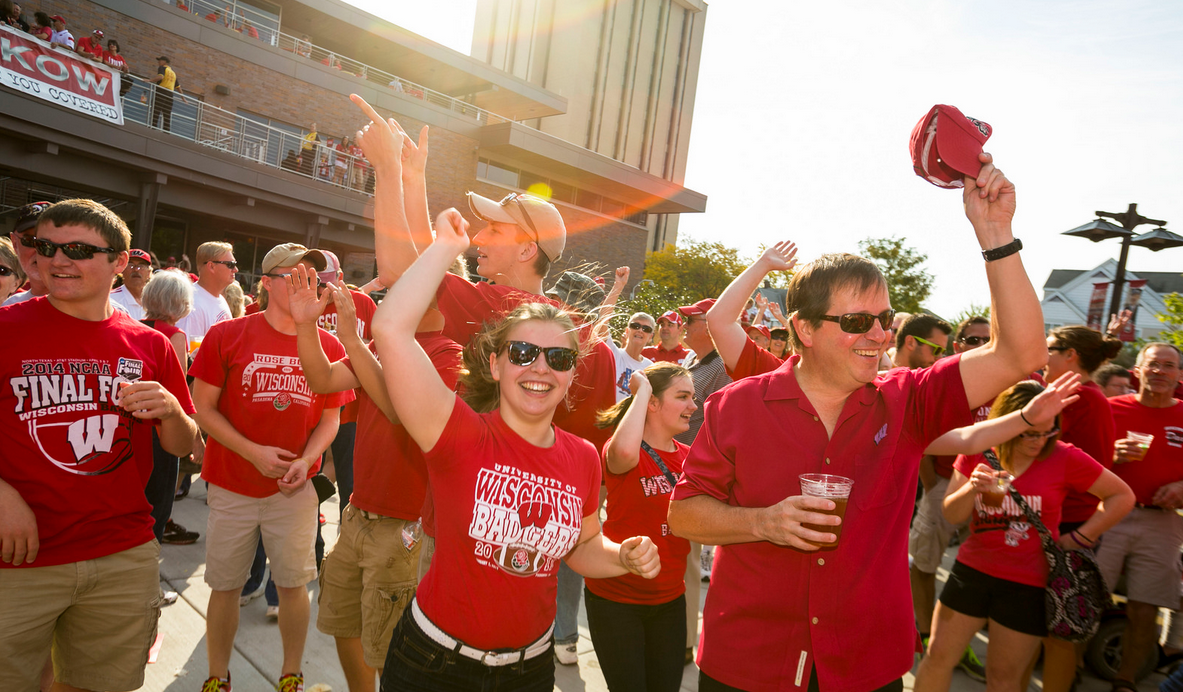 Badger Fans get Ready for a game day at Union South.

There’s nothing quite like the atmosphere of a Wisconsin football game… the smell of grilling brats, the sea of red cheering for its favorite team and the sounds of the Wisconsin Marching Band all blend together to represent the camaraderie and spirit of Badger Football.

What if there is a way to experience the atmosphere of Camp Randall even if you don’t have tickets? Badger Bash is your answer. As the official tailgate of UW-Madison, there’s no better way to celebrate game day. The festivities start with a full performance from the iconic University of Wisconsin Marching Band parading around the outdoor plaza at Union South. Michael Leckrone, legendary Director of the Marching Band, leads the band in playing all the classic game time songs. Instead of hearing Buttercup from across a football field, Badger Bash attendees bump up right next to the band.

Tubas and drums aren’t the only attractions at Badger Bash. The University of Wisconsin cheerleaders perform to the sound of the marching band while Bucky takes selfies with fans at Union South. Local celebrity emceess get the crowd going with chants and activities as well.

Badger Bash also serves as the pre-game hub for media outlets, with WKOW and ESPN 1070 broadcasting live from Union South. There’s no better background music for discussing the upcoming game than the UW Band mixed with the cheers of Badger fans.

Most Badger Bashes also feature a special event that matches the theme of whichever rival team is coming into town. For example, this year the Badger Bash for the University of Hawaii game will have a collection of Hawaiian-themed games and activities. Other events include Oktoberfest, Halloween, and a grand celebration for Bucky’s birthday on October 3rd.

On the other side of Union South, kids enjoy inflatable obstacle courses while local band Northern Hooks plays rock and roll for those who have had their fill of the brass marching band.

Badger Bash aims to be a destination for all, and is completely free to the public. The next best thing to watching the game in the stadium is watching it on one of Union South’s massive projector screens. Coupled with the Sett’s food, drink and activities, a game day experience just outside of Randall is the next best thing to the one inside.

While most Badger fans are aware of the famous Fifth Quarter at Camp Randall, many are unaware of the out-of-stadium Sixth Quarter. Once the game is over, the UW Band returns to Union South to celebrate the recently finished game. Any of the classic songs played after the game can also be heard at the Union South Plaza.

Outside of Camp Randall, nowhere are there as many Badgers from so many walks of life as Union South does during Badger Bash. Students and alumni, old and young, locals and out-of-towners all join together to celebrate the Badgers before they make their way to the greens of the football field, and Badger Bash hosts the celebrations with free and fun activities for everyone.